Below you will find a description of each of the refractive errors that require glasses. Thus, if you, a friend, or a family member wears glasses, you will be able to better understand the characteristics of the visual disturbance. You will also learn what is unique to the pair of glasses required to correct each problem, and what the future holds for you in respect to visual changes.

Even though every person wears glasses that were made especially for him/her and are different than the glasses worn by any other individual, it is possible to divide visual disturbances that require correction by glasses into a number of categories. Every person, or rather, every eye, belongs to one of these groups.

More so, a refractive error may be a combination of a number of categories. For example: a person may be nearsighted, require reading glasses, and additionally, require a cylinder to correct his/her astigmatism.

After you have finished reading this introductory section, you may find detailed information about e ach of the categories in the specific appropriate section. (In order to return to the Index press this link). 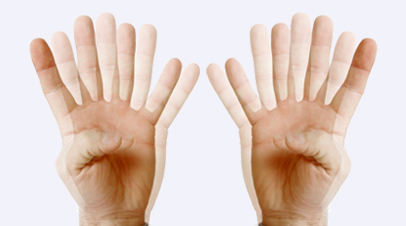 This is the most common refractive error, so that if you wear glasses it is most likely that you suffer from this disturbance. Myopia is characterized by good vision (occasionally even better than that of a person who does not wear glasses) for close objects, but weak vision for things that are far away. The higher the number of the prescription of a myopic person, the blurrier the picture that person sees of far away objects (when not wearing glasses). In addition, in order to read without glasses, the person will need to hold the book closer to his eye as the magnitude of myopia increases.

Myopia is generally caused by an eyeball that is slightly larger than normal. It only takes half a millimeter of increased size to turn a normal eye into myopia, and necessitate glasses. As a result, since the eye is larger than normal, the image that a person sees does not fall precisely on the retina (the retina is the part of the eye which senses the image, much like film in a camera). The purpose of glasses is to sharpen the picture so that it will appear in crisp focus on the retina. In addition to requiring glasses, some myopic eyes suffer from weakening of the peripheral retina and are therefore at a slightly higher risk for the development of tears in the retina, as well as other degenerative processes that involve the retina. You can read more about these retinal changes in the section on Nearsightedness (Myopia).

Myopia first appears in childhood and it is to be expected that the prescription number will increase with time. The power of the glasses prescription generally stabilizes in a person’s early twenties.

Hyperopia (farsightedness) is not as common as myopia. It is somewhat more common in females. People with hyperopia have more difficulty seeing objects that are close by than those that are far away. Generally, blurriness is less significant in this disturbance, certainly in early life. People who are hyperopic require reading glasses at a relatively young age (for instance at age 40, instead of age 45). Additionally, it is occasionally recommended that they wear glasses even if they see clearly (for example, in order to reduce eye fatigue). Young children with hypoeropia are often recommended to wear glasses to minimize the risk of crossed eyes (strabismus) and development of a lazy eye.

Hyperopia is generally caused by an eyeball that is slightly smaller than average, by as little as one or two millimeters, so that the perceived image does not fall precisely on the retina. The purpose of glasses is to sharpen the picture so that it will appear focused on the retina and thus allow for clear, sharp vision.

When hyperopia is slight, one can manage without glasses and therefore there are many hyperopic people who are not diagnosed as such and who do not know that glasses may alleviate some of the visual symptoms which they complain about.

Astigmatism is a refractive error that requires glasses and is characterized by elliptical convexity instead of spherical convexity. This sounds rather complex, let me try and explain. An astigmatic eye requires correction by glasses which consist of an elongated component (in the shape of an ellipse) as opposed to the glasses required for the correction of myopia or hyperopia, both of which require spherical correction (in the shape of a circle). Indeed, it is not easy to briefly explain about astigmatism without the proper background in physics and optics. Glasses that are appropriate for astigmatism contain a “cylinder,” so that astigmatism and cylinder are essentially two aspects of the same phenomenon. Astigmatism being the distortion in the eye, while cylinder is the corrective lens placed in front of that eye in order to correct the astigmatism.

It is common to find that people who require glasses become alarmed when they first learn that they have astigmatism (it is not rare for a worried patient to approach to me and say “they found that I have a cylinder in my eye”). However, there is nothing out of the ordinary in the fact that an eye that requires glasses also requires a cylinder component. Perhaps the only thing that distinguishes a cylinder from refractive corrections that don’t contain a cylinder is that it is slightly more complicated (and time consuming) for optometrists to determine the precise prescription of the glasses. Additionally, the price of corrective lenses is slightly higher when they contain a cylindrical component.

In summary, when an eye that requires glasses has an astigmatic component, the refractive correction is called ‘a cylinder’. These glasses look entirely normal, with the convexity of the lens having a slightly elliptical pattern, which is usually impossible to notice.

Read more detailed information in the section dedicated entirely to: Astigmatism and Cylinder.

I will begin with a short introduction: Young people can easily see up close as well as far away. Our eye can focus on objects that are located at varying distances, a quality called accommodation. This characteristic ability to change focus is a result of our ability to change the shape, and thus the curvature, of the natural lens. This change in shape is a response to our brain’s command. When the brain perceives the object that we are looking at as being far away, the brain transmits a command to the lens to become flatter. On the other hand, when one is reading from a book that is located close by, the lens is instructed to become more curved (more convex).

However, with time, as a result of changes related to age, our lens loses its flexibility and therefore loses its ability to easily change shape. As a result, despite the fact that the brain continues to transmit commands, the lens, and therefore the eye as well, has difficulty changing its focus (changing from distant focus to close-up focus). Over the age of 40 people who never wore glasses start feeling that focusing up close becomes more and more difficult. In order to make up for this bothersome situation, most people will require reading glasses by the age of 45, in order to clearly see objects that are close, such as reading, or identifying the text on your phone panel.