A Man of Vision

Glaucoma and cataracts are two common causes of blindness. A new book by an Israeli ophthalmologist describes them and details how they can be cured or controlled.

Was David the world’s first expert on ophthalmology? His adversary, Goliath, had vision problems. The biblical text indicates that this was not due to glaucoma but to a pituitary gland tumor, which puts pressure on the optic nerve. The tumor was also responsible for the overproduction of growth hormone which made him a giant. David took advantage of Goliath’s problem, got up close and managed to fell him with a single stone from his sling.

This is the only scientifically unsubstantiated fact in a new Hebrew book written by Prof. Eytan Blumenthal, head of the glaucoma service and a senior physician in the ophthalmology department at Hadassah University Medical Center in Jerusalem’s Ein Kerem.

Called Cataract Ve’glaucoma, the 125-page volume deals with these two major ophthalmological problems. Published by Prolog/Medbook, the authoritative NIS 65 book (available in shops and from www.ibooks.co.il) is aimed at anybody over 50 – the age group at the highest risk for cataracts and glaucoma, which are the Western world’s major causes of visual disability and blindness. Included are chapters with questions and answers about the two eye diseases, and a variety of helpful black-and-white illustrations.

A graduate of the Hebrew University-Hadassah Medical School, Blumenthal completed his residency in ophthalmology at Hadassah, and then spent a two-year fellowship at San Diego’s glaucoma center in the University of California, which is considered one of America’s leading research and treatment centers in this field. During this two-year fellowship, Blumenthal trained extensively in the clinical, surgical and research aspects of glaucoma. He then returned to Hadassah, where he was made director of its glaucoma service and introduced significant changes, including new diagnostic approaches and standardized therapeutic routines.

ALTHOUGH BOTH can cause blindness and are diagnosed mostly in the middle-aged and elderly, the two diseases are very different. Cataracts, in which the eye’s lens becomes cloudy, can’t be prevented or its development slowed with medication, but it can be cured safely by surgery even on nonagenarians. Glaucoma, Blumenthal notes in the book, causes harm that cannot be repaired – but eye drops, laser treatment and, if necessary, surgery can halt or significantly slow the disease.

The most important thing is for people, especially those with a family history of such disorders, or with diabetes, to get checked regularly (and painlessly) by their ophthalmologist. It is recommended to have an eye exam every two years after the age of 35, and people with a higher risk should be examined at least once a year.

People with cataracts feel as if they’re looking through a dirty window or curtain. While the condition is usually due to ageing, cataracts can also develop from trauma to the eye, diabetes or taking certain medications (especially steroids), and there are also genetic influences that make them appear in children. The first signs are a combination of symptoms, including painless fuzzy vision, the need to change an eyeglass prescription every few months, a feeling of being blinded by lights, the need for strong illumination while reading, weaker night vision and faded color vision. A well-advanced cataract looks white, rather than the normal black seen when a person looks into the patient’s pupil. It can, however, be diagnosed in the earlier stages only by an ophthalmologist. Because the lens is translucent or almost opaque, the eye doctor will have difficulty diagnosing other diseases behind it (such as glaucoma and age-related macular degeneration), thus removal of the lens and its replacement with an artificial one will make it possible to do so.

The notion that the patient has to wait for surgery until a cataract is “ripe” is outdated. Blumenthal says it’s preferable to have the operation as soon as a cataract bothers the patient. Cataracts are usually removed from one eye at a time, with weeks or a few months between the operations. Complications such as an infection or bleeding are rare, and can be dealt with by the surgeon. It is a common error that people think lasers are used to take out the cloudy lens. Usually it is removed whole with tiny surgical tools, but sometimes it is “exploded” into tiny bits – using ultrasound – within the capsule that holds it and then sucked out. A “secondary cataract,” in which residual cells from the surgically removed lens multiply and disrupt vision, is taken care of with lasers, however, in a procedure that takes a few minutes.

Ninety-five percent of cataract surgery patients have only a local anesthetic using eye drops. They are completely awake and hardly feel a thing, Blumenthal says. And the surgery is performed in a day surgery center, with patients almost always sent home a few hours later; some are kept overnight for observation.

A FOLDABLE plastic lens, and more rarely a rigid one, was not always implanted after the lens was removed. Dr. Harold Ridley, who was the American pioneer in this, was treating a former fighter pilot whose eye had been hit with a piece of plastic Perspex shrapnel during World War II. It was left in, and the wound recovered; even years after the injury, the piece of plastic caused no inflammation, rejection or toxic reaction.

Ridley – who received a knighthood from the Queen of England for his contribution to cataract treatments, and died three years ago at the age of 94 – realized this discovery was the basis for implanting plastic lenses; this was many years before anyone dreamed of intentionally inserting a foreign body into the eye.

What innovations in cataract surgery are ahead? Blumenthal says researchers are working on a technique that allows the artificial lens to focus for near and distant vision using the muscles that were connected to the natural lens, eliminating the need to wear various pairs of glasses. This might also be accomplished by injecting the evacuated capsule with flexible silicone. Robot surgery performed by eye surgeons located far from the patient is being discussed, but implementation is still a long way off, says Blumenthal.

THE SECOND half of the book is devoted to glaucoma, which usually causes no symptoms in the early stages but can result in significant vision loss before the patient realizes anything is wrong. It is actually a group of diseases in which damage to the optic nerve occurs as a result of increased intraocular pressure, which is due to a problem with drainage of fluid from the eye. The elevated pressure compresses the optic nerve, limits its blood supply, destroys nerve fibers and causes loss of vision, Blumenthal says.

Glaucoma patients will often lose part of their vision without noticing the loss, because they tend to lose their peripheral (side) vision first. Later on, a person’s central vision will become affected too – and any vision lost because of glaucoma is gone forever.

There are several types of glaucoma, with the most common being chronic open-angle glaucoma, which constitutes about two thirds of all cases. It is usually painless and can be diagnosed early during a proper eye examination. Screening tests are performed by an ophthalmologist who measures eye pressure using a device called a tonometer.

Glaucoma, Blumenthal continues, is sometimes difficult to diagnose because one can’t know exactly how much pressure will damage a person’s eyes. The doctor will inspect the optic nerve, possibly using a computerized machine to analyze the bundles of fibers in detail. You may also receive a visual field test, to examine how much peripheral vision you have lost.

Hadassah’s glaucoma service has installed a new machine called a scanning laser polarimeter that creates a map detailing the retinal nerve fiber layer thickness of the central retina, making exact measurement of retinal fibers possible for diagnosing glaucoma. Repeating measurements every few months or years allows followup to see if the disease has progressed and to adjust treatment.

Treatment includes medication, as well as laser treatment and surgery when needed. Different types of drops – most of them included in the basket of health services – are used several times a day to help decrease the amount of fluid produced in the eye, or to increase the amount of fluid draining from it. Laser treatment may be used when eye drops can no longer control pressure build-up.

This user-friendly book ends with a detailed explanation of the various types of eye drops, and how to apply them properly.

Now there are no excuses. Go and get your eyes checked! 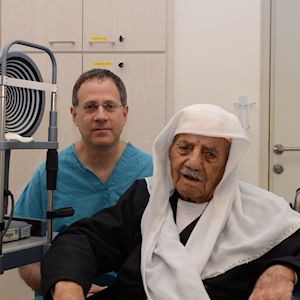 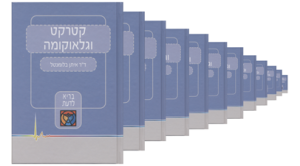