The Different Types of Glaucoma

Glaucoma is a disease of intraocular pressure which is too high for the health of the eye. The underlying cause for the increase of intraocular pressure leading to glaucoma is a decrease in drainage of the fluids out of the eye. Therefore, different types of glaucoma may be categorized according to the reasons for this decrease in drainage (which may also be referred to as clogging of the drainage channels).

This decrease can arise from different causal factors, where each type has a specific name and course of treatment. It is crucial to make a precise diagnosis of the type of glaucoma present in each patient, in order to provide the most appropriate treatment. Examples of different types of glaucoma include: (i) “congenital glaucoma” which occurs when the drainage channels fail to form during embryonic development, and hence, fluid finds it hard to leave the eye in these unfortunate babies. (ii) “Closed angle glaucoma”, a condition in which the iris blocks fluid passage, preventing the fluid from reaching the angle structures where the outflow channels start, and (iii) “secondary glaucoma” which occurs when a different eye disease, distinctive from glaucoma, causes blockage of the drainage canals. Last, and the most common type of glaucoma, is “open angle glaucoma”. In this type of glaucoma there is no obvious structural reason for the decrease in drainage and the drainage angle appears intact. Since this is the most common cause of glaucoma, affecting two thirds of all patients, we will begin by describing this condition in detail. Additional types of glaucoma will be described in detail later on in this chapter.

In distinction to patients who have open angle glaucoma accompanied by high intraocular pressure, there is a minority of patients who suffer from open angle glaucoma with no evidence of a rise in the eye pressure. These patients are initially diagnosed during a routine examination based on damage to the optic nerve, later confirmed on visual field testing. It is difficult to explain why individuals with normal intraocular pressure develop glaucoma, but we are well aware of the fact that it does occur. Several theories attempt to explain why some people get glaucoma without high eye pressure. These theories address issues related to blood flow in the eye, hereditary causes (genetic changes) and intermittent high intraocular pressures (for example, pressures rising only during nighttime) which are not picked up during office visit examinations.

This entity refers to conditions which demonstrate a typically severe, significant and, most often, sudden rise in intraocular pressure due to a mechanical blockage of the fluid drainage system. This blockage can come and go, disappear and re-appear intermittently, or become chronic (persistent). The situation, in which a complete acute blockage occurs, is often due to a full closure of the drainage angle. This acute and dramatic attack occurs in eyes that have a narrow angle to start with.

As we grow older, the eye lens becomes larger and wider resulting in a progressive narrowing of the angle. This process is known to be especially common among women. In addition, closed angle glaucoma is more common in farsighted eyes in which the eye is smaller to start with, and hence the angle is often narrow due to crowding of the eye contents.

An acute attack of closed angle glaucoma occurs when the angle closes completely and abruptly, secondary to a forward movement of the iris and blockage of the drainage system located within the angle. This makes drainage of the intraocular fluid impossible, thus causing a sudden and severe rise in intraocular pressure. Patients suffering from such an attack will most often present symptoms of severe headache, pain in the afflicted eye and occasionally also nausea. The distressed eye will redden and the vision will become blurred. The intraocular pressure quickly rises and may reach values as high as 50-70 mmHg. Closed angle glaucoma attacks usually occur in one eye only and only very rarely in both eyes simultaneously.

Closed angle glaucoma is a medical emergency and has to be treated immediately. The treatment is usually performed in the emergency room and includes applying procedures to decrease the intra-ocular pressure and, if possible, laser treatment to open the blockage. The patient is often hospitalized for further treatment.

Symptoms of closed angle glaucoma include:

Some patients suffer from less severe attacks which are similar to closed angle glaucoma, except being less dramatic in presentation. The symptoms in milder attacks result from partial blockage which leaves parts of the angle open for drainage. These individuals will demonstrate a modest rise in intra-ocular pressure and their symptoms will not be as acute as described previously for acute attacks. These patients will describe incidents of transient eye pain and blurred vision that come and go over the course of weeks and months. Subsequent to a number of these incidents, deterioration to a fixed, chronic state may occur in which the eye slowly looses its ability to drain fluid out of the eye.

An acute attack in one eye increases the possibility that the other eye will suffer from a similar event. It is therefore highly recommended that such patients undergo preventive laser treatment in the healthy eye, the eye that did not yet experience an acute attack. It is also customary to suggest such treatment to those patients who have been diagnosed with symptoms of narrow angles in both eyes, which potentially may be precursors for partial or total blockage. Hence, it is not needed for a patient to experience a true angle closure attack in order to treat the condition of narrow angles. Ideally, patients will undergo laser treatment to prevent angle closure attacks before such attacks actually occur. 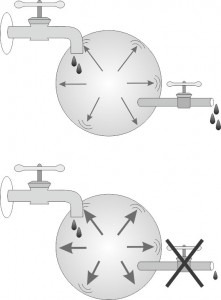 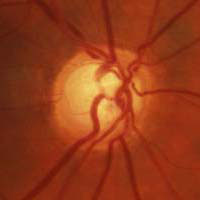