Sty: an Infection of the Eyelids

A ‘sty’ is a small localized infection inside the eyelid that in many respects is similar to acne. A sty may, therefore, be quite bothersome, but is not dangerous. Unlike acne, a sty can appear at any age, as opposed to acne that usually presents during puberty. Another difference is that acne usually appears as multiple pimples, often dozens, while a single sty is usually the rule, rarely two or three can occur simultaneously. The medical term for a sty is an ‘internal hordeolum’, but even physicians prefer to call it by the shorter, more commonly understood term, sty.

It all begins with a regular oil gland, which we all have dozens, and even hundreds of in our eyelids. These glands secrete oil that lubricates our lids and contributes to the tear film that covers the eye. However, for some reason the opening which drains the duct of this secreting gland becomes clogged, and as a result the lipids which are normally secreted begin to accumulate within the gland and cause it to fill and expand. Then, it is just a matter of time before bacteria will succeed in penetrating the gland and reach the lipid deposit that fills it. The bacteria, which feels “at home” in the fatty, oily, substance, proliferates, and infects the contents of this gland and as a result a tiny ‘pimple’ is formed, filled with pus. This pimple may be rather small but nonetheless painful, red, inflamed, and sensitive to touch. It is called a sty. This condition does not jeopardize the eye or vision in any way, but the development of a sty surely is bothersome. Additionally, from a cosmetic standpoint, a sty is often noticeable.

This small bump that contains bacteria will, in the end, cause the contents of the sty to become purulent (pus-like). With time, it is possible that the small amount of pus inside will evacuate itself spontaneously, or during the doctor’s exam he/she will be able to drain the pus (this is only occasionally possible, and depends on the stage of the sty). If the pus can be drained it will somewhat alleviate the pain and also allow for slightly faster recovery.

The main treatment for a sty includes antibiotic cream which one applies a few times a day in order to kill the bacteria which are found inside the bump which forms the sty.

It is important to note that following a sty, the lipids that accumulated in the eyelid sometimes remain in place even though the sty is no longer infected by bacteria. This lipid accumulation will maintain a small hard ‘sterile’ bump in the eyelid, sterile since it no longer contains living bacteria.

If such a situation does not resolve spontaneously, we offer the patient the option of emptying the gland (draining it) surgically, by making a fine cut on the inside of the eyelid in order to evacuate the fat from inside the tiny bump trapped within the eyelid. However, we usually refrain from draining a fresh sty, and usually wait a few months for the bacteria to die (with the aid of antibiotic ointment), and for the lipid to spontaneously absorb. Only then is surgical excision usually suggested.

In summary: A sty does not endanger the eye, and it is not contagious. However, it can be unpleasant and cause redness and swelling of the eyelid, which are not particularly pleasant. The infected stage (when the sty contains bacteria) generally lasts for a number of weeks. Applying antibiotic cream can assist with the healing process, shorten the duration of the sty, and decrease the chances of a residual bump which will necessitate surgical drainage.

Conjunctivitis
Conjunctivitis is usually an infection caused by a virus or bacteria; however, you should be aware that such inflammation can also develop in response to allergies, such as allergies to eye medications,...
Read More 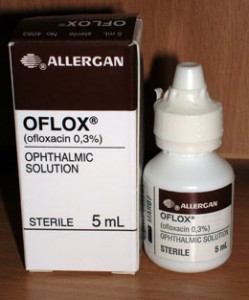 Antibiotics
Antibiotic Eye Drops: Oflox / Gentamycin / Lacromycin / Opti-Genta / Okacin / Vigamox / Zymar Antibiotics are given as eye-drops in order to prevent bacterial infection following intraocular surgery (surgery...
Read More
Dry Eyes
It is rather common for a person who has visited an ophthalmologist with various complaints of discomfort in their eyes to learn that they have dry eyes which require treatment with eye drops. This section...
Read More
Allergy
Allergies are a very common problem. Some people respond in an exaggerated manner to substances, chemicals, or biological materials that most other people do not respond or react to. Allergies can develop...
Read More
Share via
Facebook
Twitter
LinkedIn
Mix
Email
Print
Copy Link
Powered by Social Snap
Copy link
CopyCopied
Powered by Social Snap