OBJECTIVE: To evaluate the effects of the repeatability criteria on the detection of change in visual fields by six progression algorithms used in standard automated perimetry.

PARTICIPANTS: Fifty-one glaucoma patients, each with multiple visual fields performed between May 1990 and December 1998, were included.

MAIN OUTCOME MEASURES: The effects of repeatability on the detection of field change, the level of agreement among algorithms, as well as the number of eyes identified as changed with each algorithm, were assessed.

RESULTS: Mean follow-up was 34 months (range, 12-87 months). The average percentage of eyes with change based on three consecutive follow-up fields was 8.2% (4.0%-12.5%). However, of those showing change on the initial follow-up, this change from baseline was observed in subsequent examinations on average in 23% (18%-33%), depending on the algorithm. When change was based on just one field, four of the six algorithms noted a significantly greater number of eyes with change. The algorithms, however, did not differ significantly when confirmation of field change required two versus three consecutive follow-up visual fields.

CONCLUSIONS: Although current algorithms may help identify change, there are inconsistencies among them. We found that requiring repeatable change from baseline significantly reduces the number of changed eyes identified with each subsequent follow-up field. Identification and confirmation of change in visual fields plays an important role in helping to identify true glaucoma progression; however, the specific methods to do so have yet to be determined. 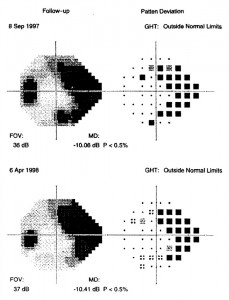