PARTICIPANTS: One eye each from 10 normal subjects and 10 glaucoma patients.

METHODS: Twenty subjects underwent a total of eight scanning sessions during two independent visits. In each session, five circular scans centered on the optic nerve head were performed. The first two sessions were performed by two experienced technicians. Followed by a 30-minute break, a third and a fourth session was completed by the same technicians. This sequence was duplicated on a second visit. Intrasession, intersession, intervisit, and interoperator reproducibility of quadrant and global RNFL measurements were calculated by use of a components of variance model.

RESULTS: The coefficient of variation for the mean RNFL thickness was significantly smaller (P = 0.02) in normal eyes (6.9%) than in glaucoma eyes (11.8%). The estimated root mean squared error based on the statistical model using three scans per patient was 5.8 and 8.0 micrometer for normal and glaucoma eyes, respectively. A components of variance model showed most of the variance (79%) to be due to differences between patients. Only a modest contribution to variability was found for session (1%), visit (5%), and operator (2%).

CONCLUSION: With the commercially available OCT, our results indicate that the RNFL measurements are reproducible for both normal and glaucomatous eyes. 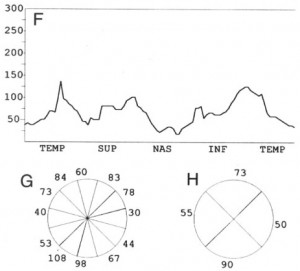